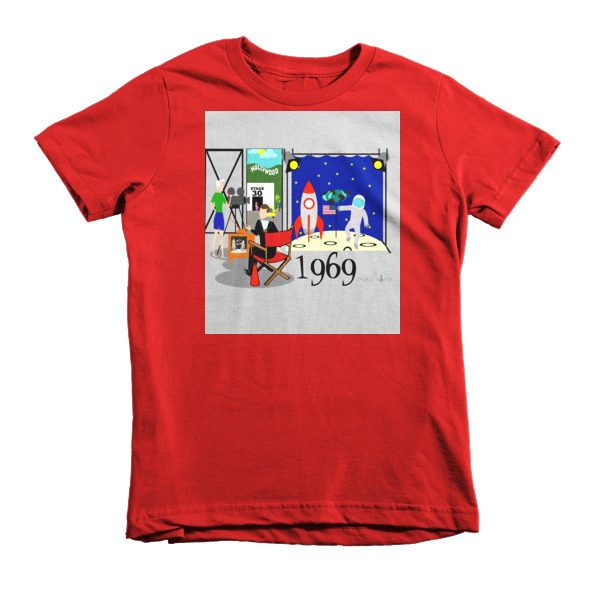 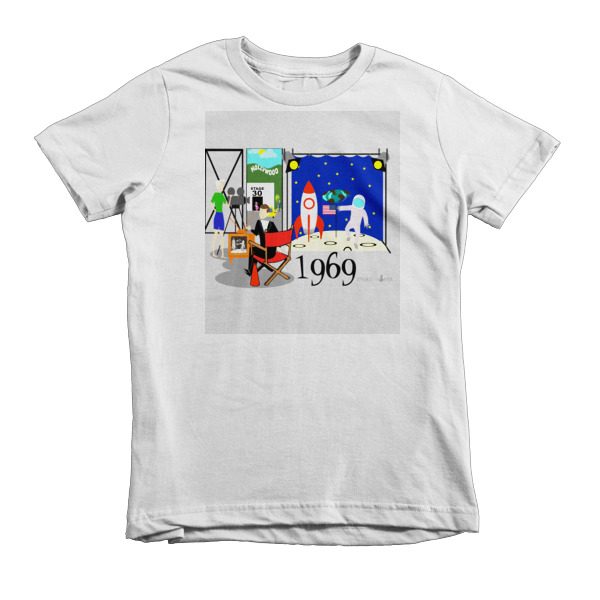 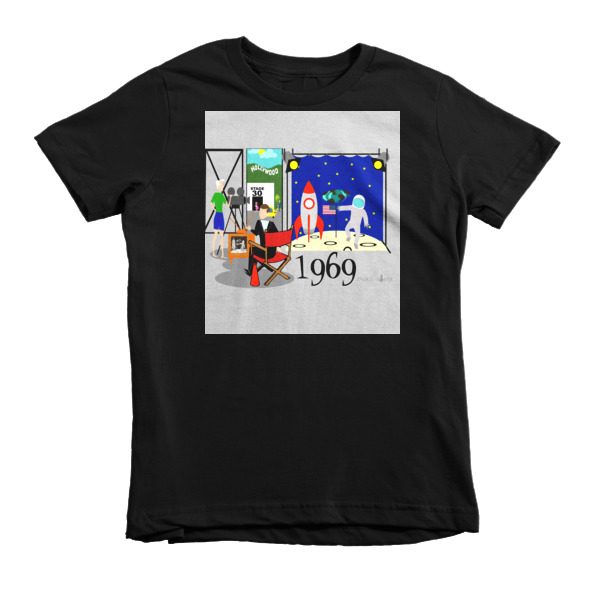 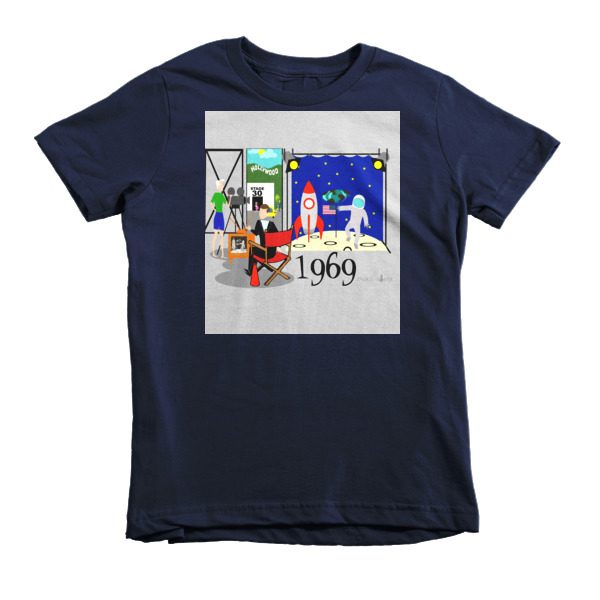 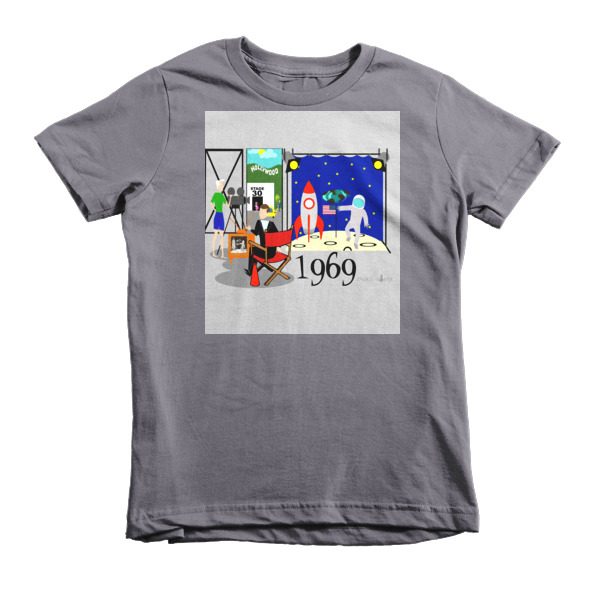 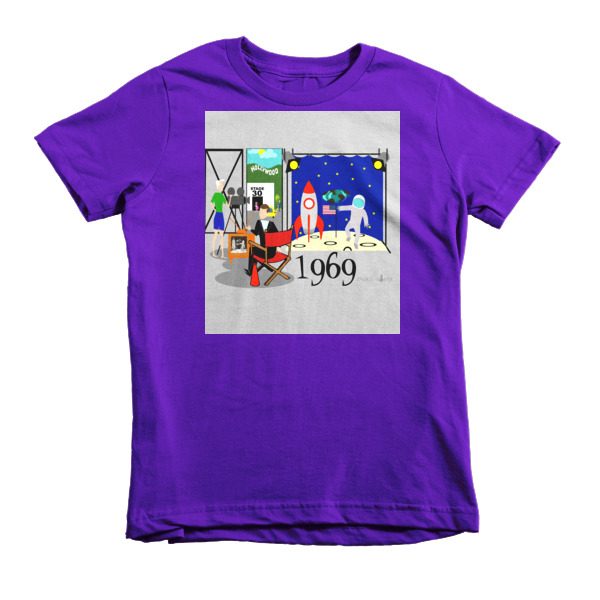 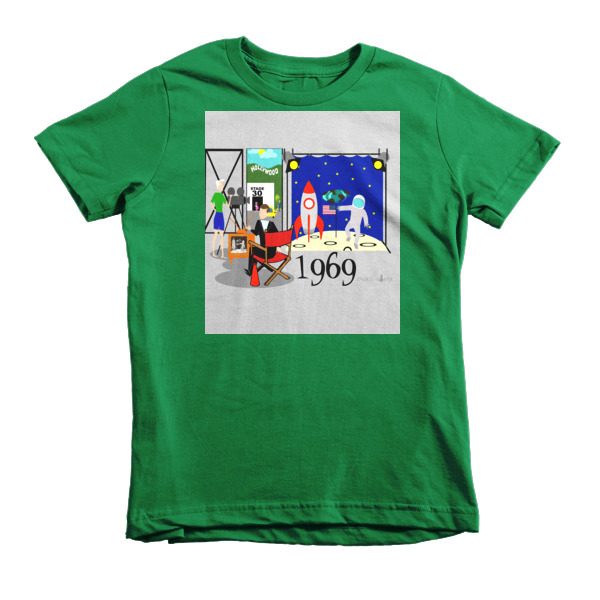 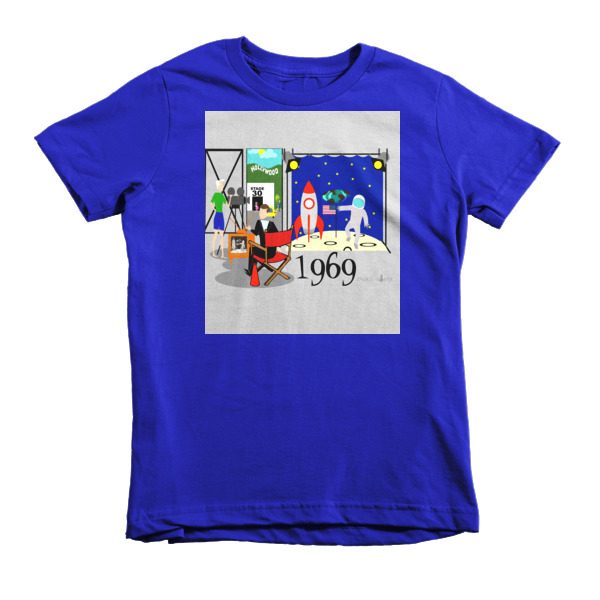 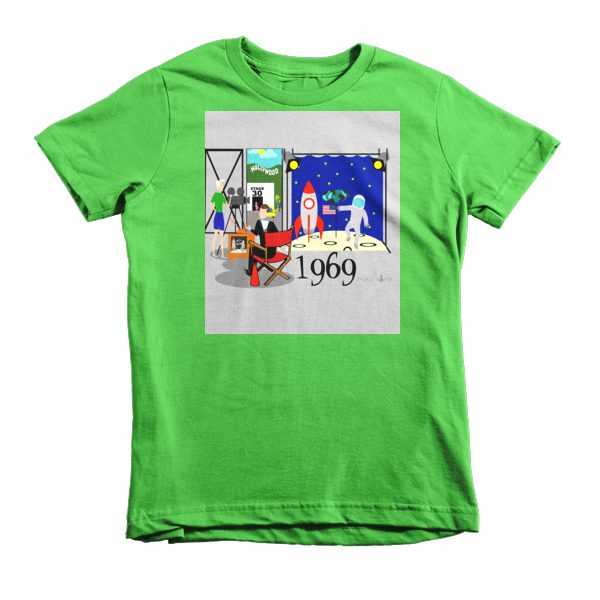 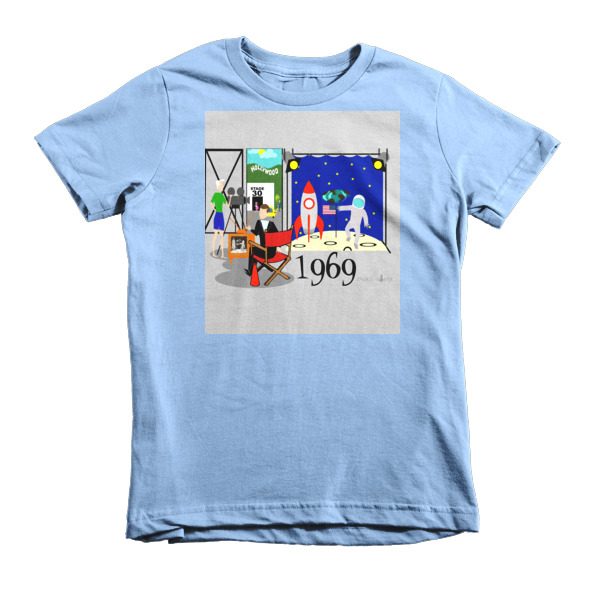 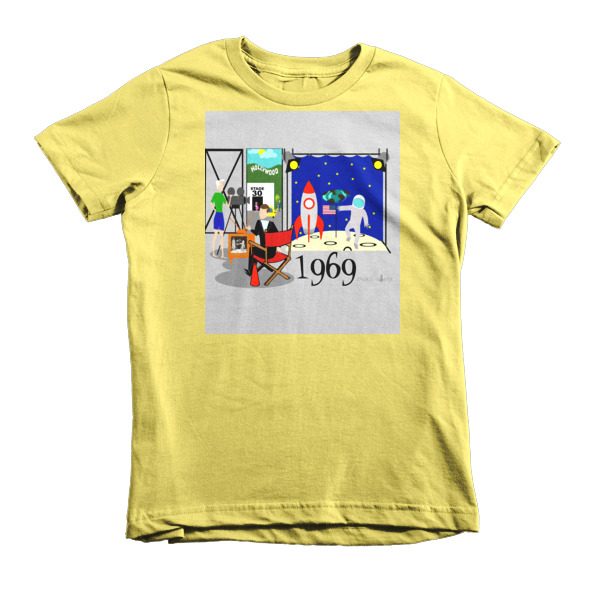 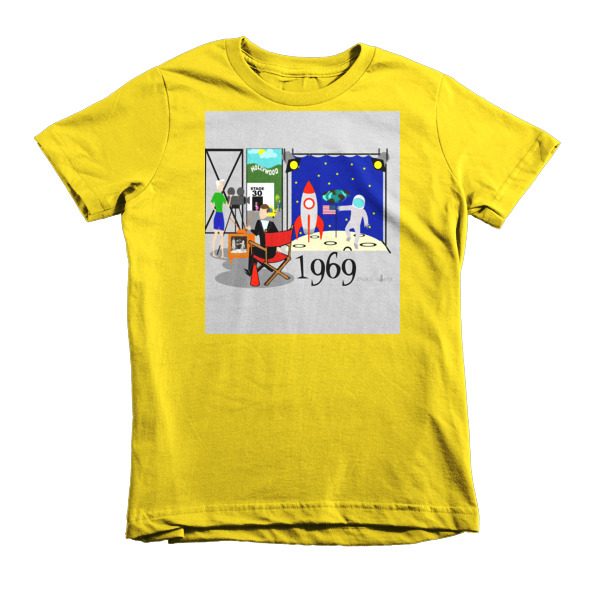 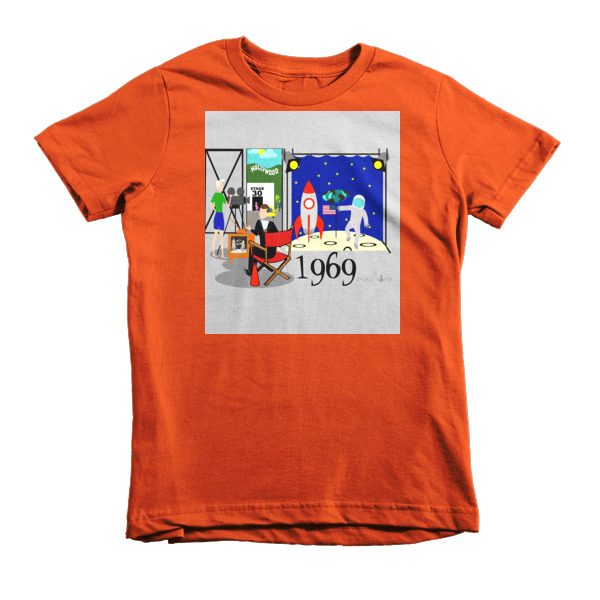 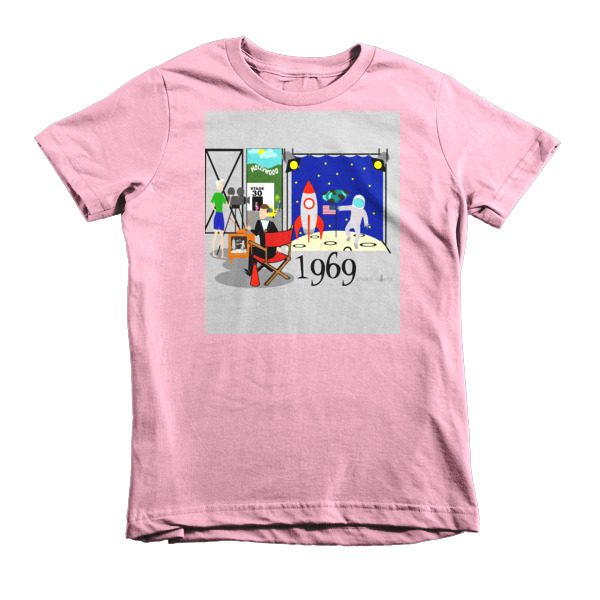 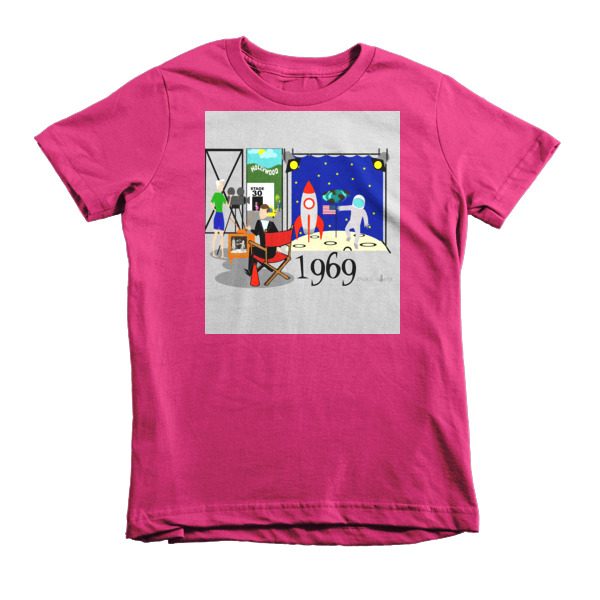 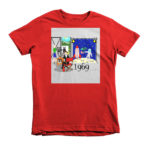 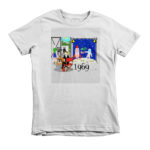 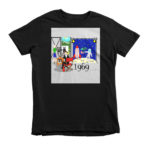 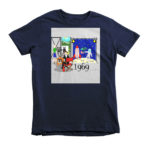 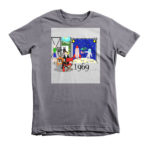 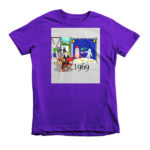 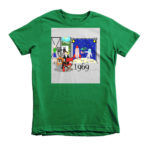 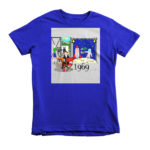 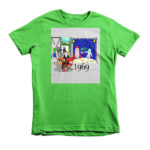 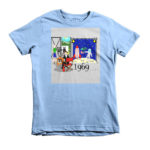 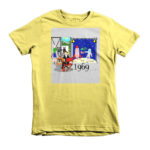 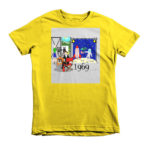 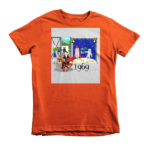 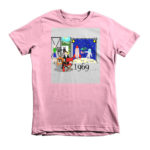 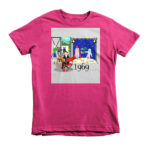 Welcome to Hollywood, California–where stars are born and conspiracies are filmed (or are they?). This Retro Moon Landing Short Sleeve Kids T-Shirt is the perfect blend of chic and geek! The minimalist cartoon drawing features a Hollywood sound stage filming the "moon landing." We see an astronaut walking on what appears to be the cratered surface of the moon. He is planting a flag of the United States. Beside him, there is the rocket ship, which we are to believe swooshed him through the cosmos. The backdrop is royal blue with shimmering stars and the distant image of mother earth. Two yellow spotlights are shining down on the set. On the opposite side of the room, a cameraman in blue shorts and a green shirt is shooting the scene. In a folding chair, the big time, Hollywood director is watching history unfold "live" on a mid century modern television set. Through an open sound stage door, we can see the Hollywood sign on the rolling green hills of tinsel town. Across the studio street, we can a nondescript, white building with bold black lettering that says, "Stage 30." A yellow sports car is parked in front of the building. A man and woman can be seen milling about in the distance. In the lower corner of the design, we can see the large, black numbers, "1969." One small design for Strange Little Onion. One giant laugh for mankind. This is the kids’ version of American Apparel’s most popular adult t-shirt. It features durable ribbed neckband and a double-needle bottom hem and sleeves.